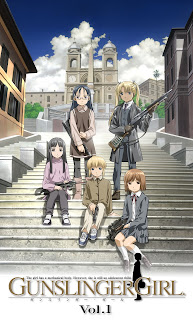 Gunslinger Girl is a relatively obscure 2003 anime produced by studio Madhouse.  It is, quite simply, one of the most impressive pieces of art to ever come out of television.

These pages are designed as a companion piece to that series.  The approach I have taken can be most closely described as a narrative-analysis: a retelling of the story in literary form that explains itself as it proceeds.  It is designed to be accessible, with descriptions and supporting imagery that do not require familiarity with the series to follow.  These pages are not, however, a replacement for an actual viewing; the anime is far superior to what I have produced here.

The Episodes are intended to be read in the order they are listed, either as a post-watch summary or following along after each episode is viewed.  The Interludes are condensed discussions, and together constitute the greater arc of the series; reading these alone will deliver the general structure, but at the cost of the exquisite detail and pathos which constitute the pith.  A rarefied outline does not do Gunslinger Girl justice.

The Appendices assume knowledge of the entire series and contain spoilers for it as well as the manga and Il Teatrino, so fair warning.  They have no particular order. 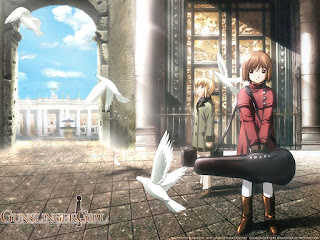 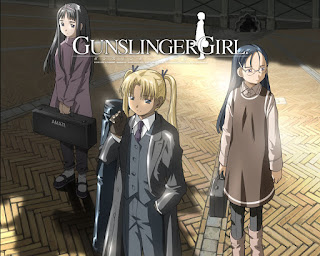 I would like to express my gratitude to all those who listened to me over these months as I worked through this project, both friends and the hapless denizens of Discord who were subjected to my ramblings.  Of these, I would like to thank in particular:

Asetotti and Suicidal Panda for being my own personal translation team.  Often the versions I had were insufficient or conflicting, and it is only through their help that I was able to figure out the intricacies.  May their own gungirl endeavors be as fruitful.

Shinzai for being a debate opponent on several issues, particularly with the opening and helping me get Claes straight.  I promise, I'll only have you look at one more screenshot of a half-hidden reflection that is only shown for a second.

D_____x and WildKazoo for being my sounding board whenever I got stuck.  The process of having to clarify to somebody else is of immense value, and there can be little doubt many breakthroughs were a result.

My dad for being a proofreader and critic of when things weren't flowing like they should.  The final form and higher standard are a result of that feedback.

And finally Rekindle, for everything: listening to my explanations, reading and giving impressions, and simply being there with encouragement as an invaluable friend.